February 26           Wajib- The Wedding Invitation (2017)  Palestinian, Language: Arabic, 96 min, Drama.
Father and his estranged son must come together to hand deliver his daughter's wedding invitations to each guest as per local Palestinian custom, in this rousing family drama from Annemarie Jacir (When I Saw You).

March 25                  Shoplifters (2018) Japan, Language: Japanese, 121 min,  Drama. Has an impressive 67 nominations at 39 Film Awards and Festivals, including the 2019 Academy Awards for the Best Foreign Language Film. It won 39 Awards including the Cannes' Palme D'Or. Many nominations are still pending.
A Japanese couple stuck with part-time jobs and hence inadequate incomes avail themselves of the fruits of shoplifting to make ends meet. They are not alone in this behaviour. The younger and the older of the household are in on the act. The unusual routine is about to change from care-free and matter-of-fact to something more dramatic, however, as the couple open their doors to a beleaguered young girl. The reasons for the family's habit and their motivations come under the microscope.

May 27                       Call Me by Your Name (2017) Italy, Language: Italian, 132 mins, Drama/Romance.
In the early 1980.s 17 year old Elio is spending a lazy summer at his family’s stunning villa In northern Italy. Excitement arrives in the form of Olive, a tall ,tanned,American research assistant who has come to join Elio’s archaeologist father in his work .As the days pass, the two spend more time
together sparking a growing attraction that will change their lives forever.​

June 24                     Jirka (2018) Australia, Language: Australian, 78 min, Drama.  Winner: CinefestOz Film Prize. Nominated for AACTA Award for Best Indie Film
Stars Sam Smith as a former Australian soldier trying to make reparations for past mistakes, returning to Afghanistan to seek forgiveness from the family of a man he killed while serving in the war. Filmed under extreme circumstances, in dangerous locations (Kandahar Province) with assistance
from the local people of Afghanistan, it shows the beauty of the Afghan country and people as well as highlighting the detrimental impact of the War in Afghanistan on Western and Afghan people. Director, Gilmour says"This is a visually extraordinary film; no Hollywood budget can fake these landscapes. It’s made with documentary precision and a stoic calm The slow beauty of it and the compassionate, flawed sorrow behind it, is enrapturing".

July 22                         (mulled wine and pizza – start time 6.30pm)  Aurore (2017)France, Language: French, 89 min, Comi-Drama.
A hugely entertaining blend of humour, truthfulness and sensitivity, Blandine Lenoir’s warm-hearted romantic comedy centres on a middle-aged woman in the midst of major personal and professional life changes. 50 yr old Aurore (Agnès Jaoui), separated from her husband and newly unemployed, discovers she is to become a grandmother. She feels as if her own life has come to a standstill but after bumping into the great love of her youth she wonders if it might still be possible to embark on something new. An endearing portrait of the resilience of womanhood with everyday heroine on the road to (re)discovery.

August 26                 Foxtrot  (2017) Israel, Language: Hebrew, 104 min, Drama.  Grand Jury Prize at the Venice International Film Festival. 8 Ophirs at 2017 Israeli Film Awards including Best Film, Director and Actor
Michael and Dafna are devastated when army officials show up at their home to announce the death of their son Jonathan. A visually bold and emotionally powerful exploration of war, grief and family. Foxtrot has garnered widespread praise for its unforgettable story which weaves 3 interconnected narratives into an overarching tale of love and loss, mixing comedy and tragedy in a wholly unique way.

September 16        The Death of Stalin (2017) U.K., Language: English, 93 min, Political Satire Comedy. Winner: 2018 UK Empire Award
Best Comedy. 2018 Bafta Scotland Award Best Director and Writer
A Comedy of Terrors. The 1-liners fly as fast as political fortunes fall in this uproarious, wickedly irreverent satire from Armando Iannucci. Moscow, 1953: tyrannical dictator Joseph Stalin drops dead, his parasitic cronies square off in a frantic power struggle to be the next Soviet leader. Among
contenders are Dweeby Georgy Malenkov (Jeffrey Tambor), wily Nikita Khrushchev (Steve Buscemi), and sadistic secret police chief Lavrentiy Beria (Simon Russell Beale) who bumble, brawl and backstab their way to the top but then, who is running the government? Combining palace intrigue
with rapid-fire farce, this audacious comedy is a bitingly funny takedown of bureaucratic dysfunction performed to the hilt by a sparkling ensemble cast.

October 28               Woman at War (2018) Island, France, Ukraine, Language: Icelandic. Spanish, English, Ukrainian, 100 min, Action/Drama/Thriller   Winner: SADC AWARD, CANNES FILM FESTIVAL 2018. Official Selection: critics' week, Cannes Film Festival 2018, and Sydney Film Festival 2018.
Halla is a fifty-year-old independent Icelandic woman. But behind the scenes of a quiet routine, she leads a double life as a passionate environmental activist.Known to others only by her alias “The Woman of the Mountain,” Halla secretly wages a one-woman-war on the local aluminium industry. As
Halla’s actions grow bolder, from petty vandalism to outright industrial sabotage, she succeeds in pausing the negotiations between the Icelandic government and the corporation building a new aluminium smelter.But right as she begins planning her biggest and boldest operation yet, she
receives an unexpected letter that changes everything. Her application to adopt a child has finally been accepted and there is a little girl waiting for her in Ukraine. As Halla prepares to abandon her role as saboteur and saviour of the Highlands to fulfil her dream of becoming a mother, she decides to plot one final attack to deal the aluminium industry a crippling blow.

November 25         (catered – start time 6.30pm)   I Am Not a Witch (2017) Zambia, U.K., Germany, France,  Language: English, Nyanja, Bemba, Tonga, 93 min, Drama. Winner:Bafta film award 15 wins including Adelaide Film Festival British Independent Film Awards
Shula an eight year old girl from a rural region in Africa is accused of witchcraft after an incident in her local village. After a short trial she is found guilty and taken to state custody and exiled to a witch camp. A funny, provocative and enchanting Agrican tale. Has worldwide critical acclaim. 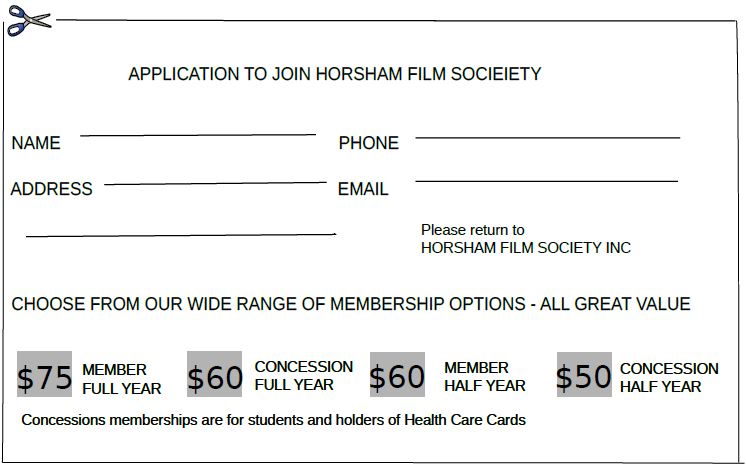